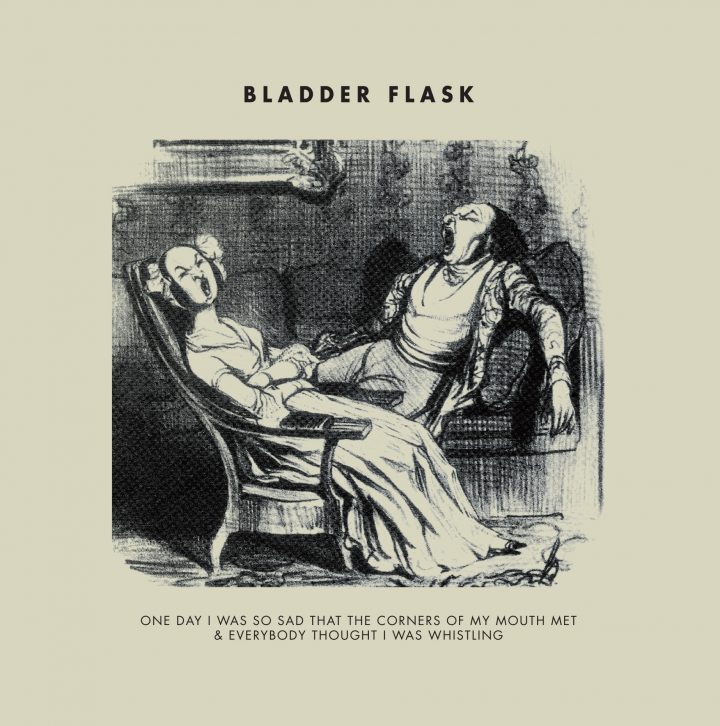 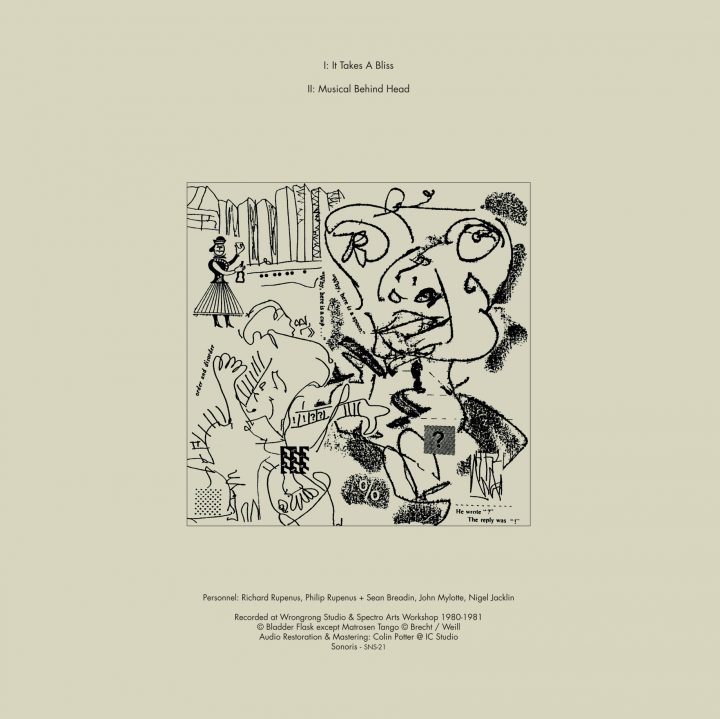 Bladder Flask’s debut (in fact only) LP, originally issued by Orgel Fesper Music in 1981, is one of the most eclectic albums of the post-Industrial era. It is both challenging and perplexing… So, put down your puny instruments of normality and breathe in the frenzied fungal spores of Bladder Flask!

The fact that Steven Stapleton of Nurse With Wound is a big fan of this album is testament to its greatness:
‘I love Bladder Flask’s One Day I Was So Sad That The Corners Of My Mouth Met & Everybody Thought I Was Whistling and what a great title, perhaps my favourite ever. I must have listened to the album so much in the ’80s. I listened to it again recently and it was like welcoming an old friend.’

LP tracklisting :
I: It Takes A Bliss
II: Musical Behind Head

A selection of comments & reviews:

Very scrap merchant, very Dada… Comparisons could be made to NWW’s Merzbild Schwet: a mixture of Musique Concrete and instrumental collages, but more intense and compact than NWW. An extremely interesting album and very cleverly done, especially the editing of complex tape treatments.
Neumusik

A puzzlingly great album. Ah, the halcyon days of bungled Kurt Weill renditions, overactive splicing hands and tape-loops lasting only a few seconds before being smudged by hyper fast-forwarding, like a random, operatic battle of thermopylae as re-created by members of NWW. Faced with omnipresent latter-day refined-aesthetic cognescenti, whose duty it is to remind one of the gravity of modern music, I find myself defending such gut-level joyous stupidity and its gung-ho determination to vertiginously swirl about all manner of daft sundries, with no regard for the mess that may be left afterwards. This is why I like this stuff and some of the worries of the world can be, if not alleviated, at least disguised in the scent of Bladder Flask’s audio compost pot-pourri.
Bananafish

A masterpiece of unrestrained Dada music, Musique Concrete and Electro-Acoustic Improv. Primitive electronics meet the sounds, or rather shreds thereof, of various acoustic instruments, field recordings, found objects, mysterious devices as well as body slapping, whistles and smacks. An augury of what the radicals of Electro-Acoustic music do nowadays, but here you also get surreal humour that could safely rank alongside the best, wildest works of NWW.
Activists

One Day I Was So Sad… comprises two side-long tracks of extended Dadaist reverie, a sublime mix of Musique Concrete and instrumental collages. Bladder Flask and their ilk were spiritual forefathers to today’s ‘clicks and cuts’ generation, creating a slapdash Industrial experimental music which exploited the idiosyncrasies of analogue tape assemblage and editing. I love this album to pieces and it gets my highest recommendation.
Other Music

This packs a helluva lot into its generous playing-time. The side-long ‘It Takes A Bliss’ ranges from free sounding structures of various instruments (played with relish) to a sometimes unnerving encounter with distorted piano strings, guitars and less identifyable sounds. The chemistry which prevents this from becoming self-indulgent is what makes Bladder Flask tick. They wind through an unsettling amount of images and the recording, mixing and editing must have taken a very long time. Most of the music is very spontaneous with even ‘Goon’ type voices appearing before being shredded by the next ‘act.’ It’s like a successive queue of cameos all awaiting and clambering for your attention. Side two, ‘Musical Behind Head,’ has slightly more direction and cohesion (or perhaps I just began to adjust to the music?) I was rather stupefied by the contents of this strange menagerie of experimental dialogue. A unique album.
Outlet

One Day I Was So Sad… is that ne plus ultra of cut-up sound art. It is an extremely strange – at times, quite hilarious – experiment in fast-moving cut-ups. Its sheer incoherence starts from the get-go and doesn’t release its hold on your poor cerebellum until you too are dragged down to a state of lunatic frenzy. It’s not a record you would play for fun, but its fractured consciousness, incoherence, and sheer Dadaist lunacy are considerable. God alone knows what sources were used to create it: screaming and coughing, all-manner of acoustic instruments are mauled and mutilated; a trumpet blown by a fat whaler, violins scraped by cretinous monkeys. Aiming for maximum disorientation, it challenges you to keep up with its restless and intense flow of ideas and you’re challenged to see past the apparent silliness of it all. Sourced presumably from multiple found sounds, tapes, and records, the piece was assembled in a deliberately fragmented fashion, each sample lasting only a few seconds and bearing no connection whatever to the next. One of the striking aspects of this concoction is the odd and ill-fitting mix of vulgar, crass humour with moments of near-pathological darkness. It’s like watching a slapstick movie from the 1930s spliced with a low-budget Italian zombie movie – custard pie fights morphing into monstrous flesh-eating, similar to how Dali and Bunuel claimed that they assembled the first Surrealist movie, Un Chien Andalou. You’re pulled in both directions at once until you can hear your own sinews snapping. It’s not a record you would play for fun, but its fractured consciousness, incoherence, and sheer Dadaist lunacy are considerable. It’s as if Bladder Flask were possessed by some fevered desire to surpass the worst excesses of the lunatic fringe end of the United Dairies catalogue. But this LP had the underlying sinister aim of sending all those who heard it mad, through highlighting the complete absurdity and futility of everything. A gibbering masterpiece.
The Sound Projector

One Day I Was So Sad… comprises, for the most part, a series of short collages which are seemingly disparate and fragmented: humorous vocal exercises, detuned piano, excerpts from Pop music and Free Jazz, electronics, tape-loops, accelerated scrolling of tapes, excerpts from film dialogues, among a thousand other things that are more difficult to identify. The flirtation with Dadaism, in particular the humour, joyful absurdity and disparate elements, is obvious. Virtuosity doesn’t seem to be of any concern to the ‘musicians’ and it seems rather inconceivable that Bladder Flask are themselves the performers of all that can be heard. Although apparently totally random, the structure, if it can be called that, is more complex than it first appears and this is in fact a very meticulous work which must have been extremely laborious considering all the tape-splicing and editing involved.
Industrial Musics

One Day I Was So Sad… is one of those records which could be described as abstract but it’s much more than that with elements of Musique Concrete, Free Jazz and Free Improvisation although it doesn’t sit comfortably in any particular genre. It has a total disregard for the constraints of Western music, be it song structure, tunes, harmony, scales, metrics, notations and other rules which are generally followed by musicians who pretentiously pose as experimental. To accurately describe this album would be very difficult, if not impossible. However, if you’re looking for comparisons then I’d have to mention other records of an extreme, free-form nature such as The Faust Tapes or, maybe the most fitting of all, Frank Zappa’s ‘Nasal Retentive Calliope Music’ which is one of the first and best examples of ‘maniac’ tape-manipulation. One Day I Was So Sad… is one of the most genuinely experimental (in the true sense of the word) records ever conceived and will appeal to those who like to push musical boundaries as far as possible. The fact that Steven Stapleton of NWW, who is considered by many to be a genius of experimentation and a living encyclopaedia of all things avant-garde, is a big fan of this album is proof of its greatness. One Day I Was So Sad… is a masterpiece of experimentation and a totally unclassifiable record.
Debaser