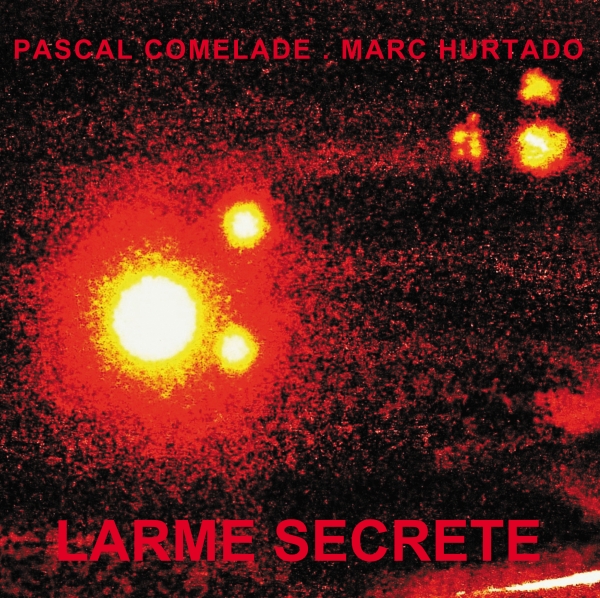 “Larme secrète” is the result of an astonishing encounter between a minimal and discreet musician attracted as much by Erik Satie as he is by various pop classics, and a poet/performer who has worked with Lydia Lunch, Genesis P-Orridge , Michael Gira as well as Alan Vega. Pascal Comelade et Marc Hurtado (Étant Donnés) are two important figures of a french underground and alternative music scene which has always attempted to interfere with other musical genres. They are both also producers, fans and cultured listeners who meld a vast array of elements and references into a dark synthesis, a hypnotic and cosmic electroshock.

This project was born following the collaboration on stage by Pascal Comelade and Marc Hurtado during a tribute to Alan Vega that Marc Hurtado organized in Paris in 2018. Larme Secrète is the sound of an electric shock, the sound of two hearts beating at the same rhythm, united in the thrilling and hypnotic music of Pascal Comelade, melted in the fire of the celestial poems of Marc Hurtado. Synthesizers, guitars, drums, organ, piano, sound loops seem to collide high in the sky with whispered, yelled, possessed voices.

Pascal Comelade was born in Montpellier. After living in Barcelona for several years, he produced his first album, under the name of Fluence, influenced by electronic music and by the group Heldon. Since 1980, Pascal Comelade has released music under his own name. Since then, his music has become more acoustic and is often characterized by the sounds of toy instruments, used as solo instruments or as part of the sound of his group, the Bel Canto Orchestra.
Marc Hurtado is half of the French experimental duo Etant Donnés. Active since the late 1970s, the group has released several albums, also collaborating with people like Alan Vega, Lydia Lunch, Michael Gira or Genesis P-Orridge. Marc Hurtado has directed many films and has also released several solo albums under his own name.