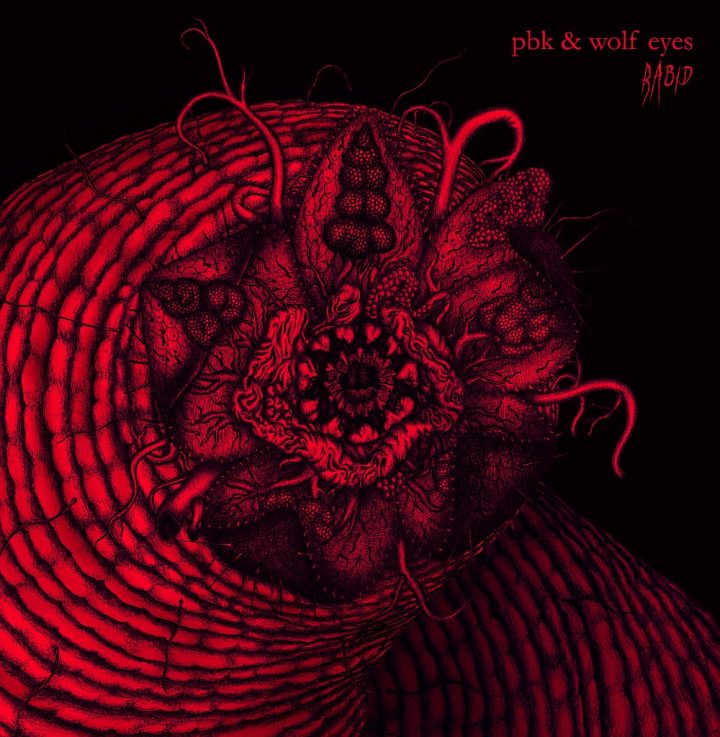 “Rabid” consists of six tracks mixed by Phillip B. Klingler, aka PBK, between 2004-06 using Wolf Eyes source material, this is the Wolf Eyes lineup of 2000-05: Nate Young, John Olson and Aaron Dilloway.
Klingler: “I was given the audio sources (via cdr) by John Olson at the Ear Candy Festival in Dearborn, Michigan, in 2004. None of the compositions on the album were completed using a computer, they were all recorded live in my home studio or at gigs and radio shows directly to digital.”
Three of the pieces on the LP were previously released in Russia on the CD, “Under My Breath”, in 2009. Also in 2009, the American Tapes label run by John Olson released a cdr of the PBK & Wolf Eyes collaborative tracks as part of the ongoing “Live Frying” series. Later, “Rabid” was available for a brief time as a net release. One review from the time stated: “Not a single track passes by without conveying grisly and creepy sensations of imminent death or disaster.”

Mastered for vinyl by Giuseppe Ielasi and with the beautiful cover illustration created by Pole Ka.

▪ Wolf Eyes is a post-industrial/noise band from Detroit, Michigan. They are widely considered the “kings of US noise”.
“Their development since the earliest rumblings in 1997 has yielded some of the most staggering and genre-defining sounds of noise and sound art’s dense, largely obscured history.” (Allmusic)