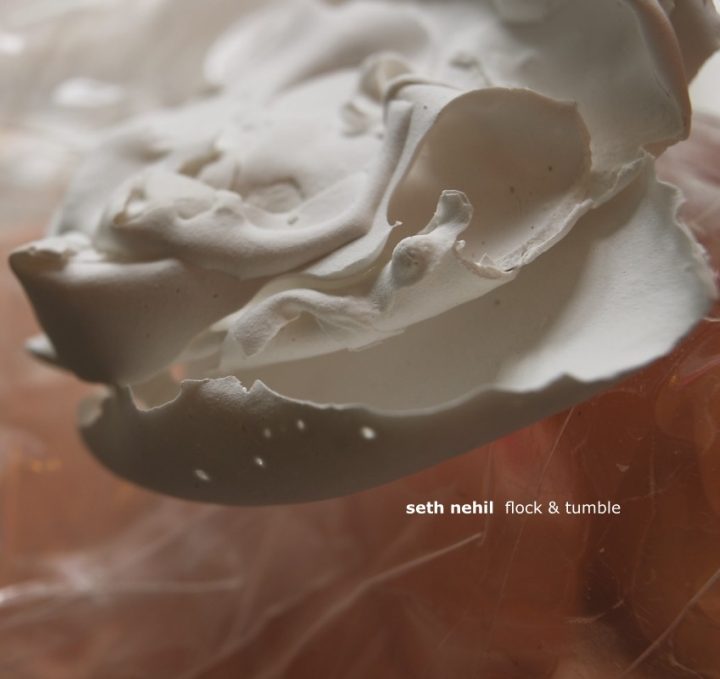 Seth Nehil is an American artist involved in various projects ranging from compositions for dance, installations, multimedia performances, publications and visual art. Over the years, he has collaborated with other significant sound researchers (John Grzinich, Olivia Block, Michael Northam, Matt Marble and Brendan Murray) and has released many CDs on international labels such as Kaon, Alluvial and …Edition.
It’s not so easy to describe the music of Seth Nehil: like a compound of several substances, obtained by capturing natural and urban sounds, manipulated instruments, as well as by electronic treatments and textured objects.
Flock & Tumble is another fine example of his new direction : shorter tracks with an almost song-like structure and a large sound palette that includes the human voice as material. Flock & Tumble explores haphazard clusters, abrupt shifts, percussive rattles and gentle clouds.
“Extraordinary… a wonderful sense of confidence in the material, an ability to go somewhere quite new.” – Richard Pinnell (The Watchful Ear)
“Not too often you come across something that just sounds like little else.” – Brian Olewnick (Just Outside)
“An important demonstration of Nehil’s abilities, this is a classic sleeper which deserves immediate exposure, well beyond the small circle of experts to which music like this is usually addressed.” – Massimo Ricci (Touching Extremes)