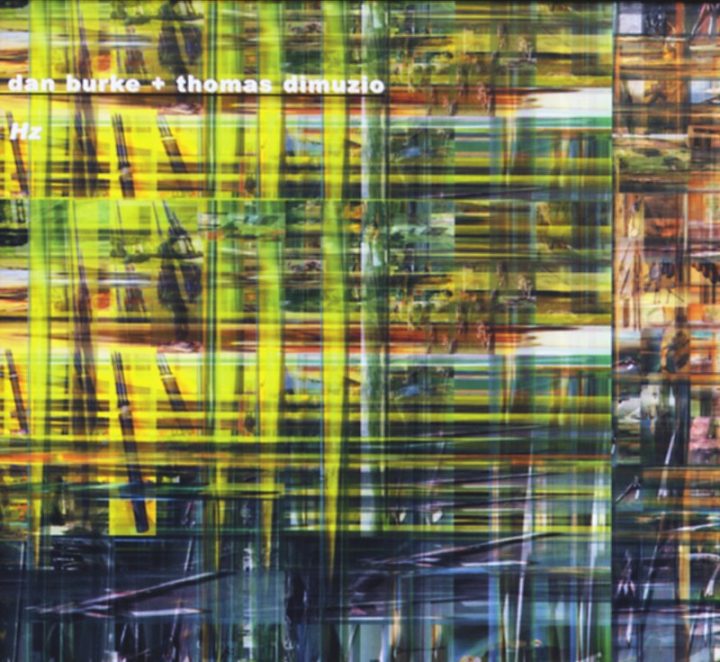 The truth is, you found something incomprehensibly comforting in these sounds, this noise, this audible darkness. It occupies the space and fills your lungs, so in such a short time you grew accustomed to this nightmare, probably just in time for Burke and Dimuzio to sever the umbilical cord so suddenly, leaving you helpless and in silence. (Richard di Santo / Incursion)
–
Dan Burke has called this one of his favorite works he’s put out. Dimuzio is the guy behind Gench Studios, the place where so many experimental labels get their stuff mastered. HZ is a refined, driving, eclectic nightmare of beats, darkhop and odd sound tones and soundscapes. The listen deepens as it progresses, with varied layers of styles developing and fading. Very nice little digipack item. (Manifold web site)
–
Illusion of Safety mainstay Burke and sonicist errant Dimuzio are a perfect pair. Their common chosen path is one of electroacoustic exploration, combining sampling, processing, tapes, and live noise-making (calling their enthusiastic instrumental and radio-knob manhandling “musicianship” would be overly generous) in live and studio settings. Each artist brings to the workbench an affinity for the nature of sound.
HZ documents a series of California performances presented by Burke and Dimuzio in October of 1997. The improvised tracks operate in the desolate arena of post-industrial sound, but the perpetrators take a page from the example of AMM’s jazz-like metamusical interplay to imply a certain, if covert, human presence. Motors purr, hiss, scrape, and groan, setting up a foundation of sonorous drones for Burke and Dimuzio’s sonic manipulations and electronic outbursts. The duo’s efforts range from freakish alien-zoo atmospheres (“Aware,” “Dross,” “Outflow”) to the labored workings of arcane machinery (“Dropforge,” “Rota”). HZ strikes an especially poignant note on “Charastrigor,” as radio strains drift sadly across the rubble of a bomb-scarred city square.
(Allmusic)