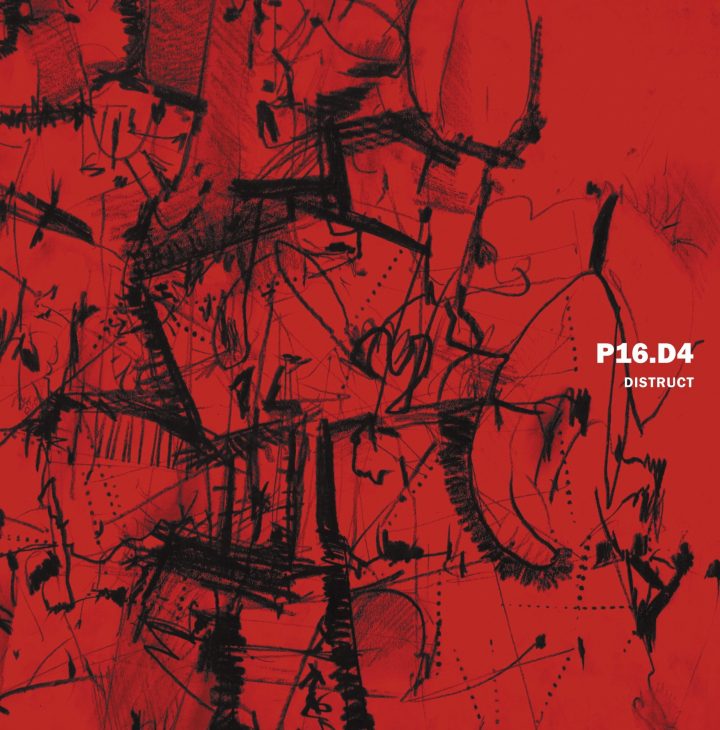 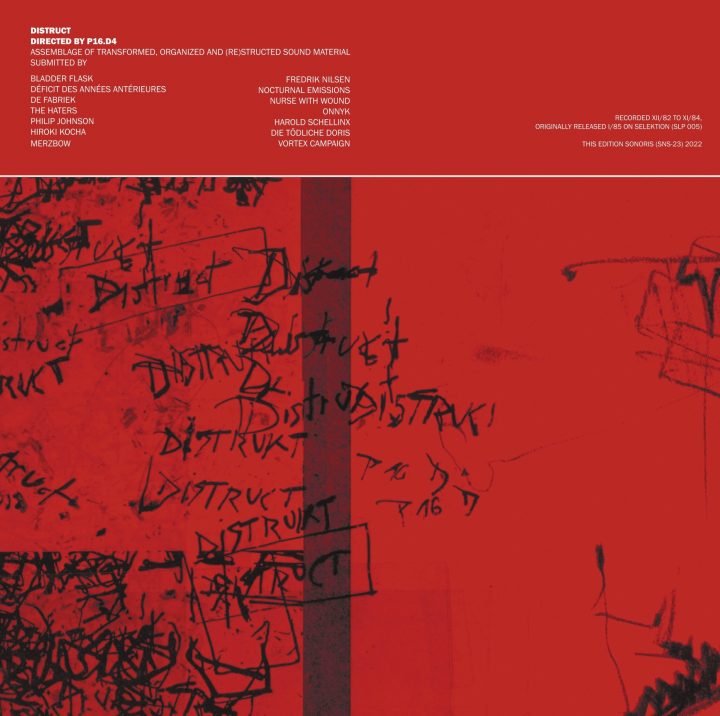 “On this, their second LP, P16.D4 solicited tapes from several artists from Europe, England, the U.S., Canada, and Japan, and mixed that with their own material. Though in the current digital age collaborations from artists thousands of miles apart is quite normal, this was a quite radical approach back in 1982, when work on this LP began – an interesting concept that actually works quite well, since these artists, which include Bladder Flask, DDAA, the Haters, Merzbow, Nocturnal Emissions, Nurse With Wound, and several others – work in a similar free-ranging experimentalism as P16.D4, and their particular elements, usually just vocals or one instrument or noise implement, blend well without diluting P16.D4’s own peculiar brand of avant-garde post-industrialism, but merely give it another facet. One of the best tracks, “Aufmarsch, Heimlich,” consists of a choir submitted anonymously from Eastern Europe phasing in and out of static while a skronky alto sax bleats away. Most of the pieces exist somewhere just beyond the borders of free jazz, industrial, and even classical avant-garde, full of jarring noises and strange transitions and with a heavy overlay of electronics. What started out as an experiment yielded one of P16.D4’s best albums.”
Rolf Semprebon / AMG

“Distruct is organized around sounds provided by the cream of experimental musicians of the early ’80s, from Nurse With Wound to Nocturnal Emissions, via De Fabriek, Die Todliche Doris, The Haters, Merzbow, and others. Obviously, there is no question of remixing here, and at no time do P16.D4 seek to hide its sources, clearly identifying the contribution of each artist in the liner notes. It would be futile to try to find the paw of each artist, the trio operating vis-à-vis its collaborators the same methods as in their own work. Reworked, distorted by various effects, cut, edited, aggregated with other sounds, produced by P16.D4 themselves, reprocessed. Exchange, communication, two other data that will constantly recur in the work of P16.D4, rich in external contributions and encounters of all kinds. Musically, and despite the diversity of sources treated, Distruct escapes the heterogeneous character, which often marks this type of collaboration, to offer a coherent whole: fragments of opera, Soviet speeches, out-of-tune guitar, saxophone, tattered violins, overdriven and metallic noisy attacks, jackhammers, field recordings, battered choirs, and many other less identifiable sounds. In addition to the desired dialogue between the artists, Distruct also offers a real reflection on listening, and on the expectations of the listener.”
Dissolve

P16.D4 was a German electronic noise music collective, active primarily from 1980 to 1988. P16.D4 embraced tape cut-ups, musique concrète, endless recycling and transformation of previously published material, and many long-distance collaborations with like-minded artists such as DDAA, Vortex Campaign, Nurse With Wound, and Merzbow. Their active participation in the international industrial tape scene yielded collaborative output such as their release Distruct, where bands such as Nurse with Wound, Nocturnal Emissions, Die Tödliche Doris, and The Haters provided the source material. The longest-term collaboration was with the installation and conceptual artist Achim Wollscheid, who used P16.D4 sounds as the basis for LPs he recorded under the name SBOTHI. Ralf Wehowsky, the only constant member of the group, later released solo material under the alias RLW.
Members of P16.D4 were also involved with Selektion, a collective of people involved with sound as well as the visual arts. Selektion published LPs, CDs, books, visual art and design.

The collective worked in a strongly improvised, spontaneous and anti-professional way, using acoustic and electronic instruments, using existing sound fragments, duplicating and alienating them, using repetition, distortion, changes in speed and playing direction. For this they used not only sounds of other artists but also their own material from earlier productions. Late works of the collective are associated with musique concrete.